The people of Ehdrigohr live in a world that is wondrous and magical. Beauty and magnificence abound in wild places of the world and within the constructions and creations of mankind. Unfortunately, so do things that are terrifying. 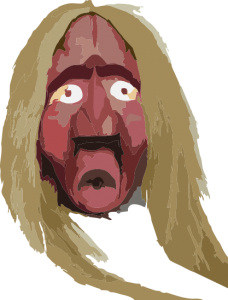 Terrible things that threaten to control, corrupt, or destroy lurk in the unseen regions of the world, and within the hearts of men. The very cycle of day and night in the world is a constant reminder of this. The beautiful meadow, or grand mountains, that inspire joy or hope when the sun shines, become the source of fear, and a threat to survival when the night comes.

What is worse, is that regardless of what a person’s imagination might conjure up, it typically pales in comparison to coming face to face with the true nightmares that lurk in the darkness. The only way for the people to continue to grow, however, is to learn to manage their fear.

The game differentiates between what is simple fear and what is truly horrifying. Fear attacks are mental attacks that target emotions and typically result in emotional consequences. Something that causes fear typically has a strength depicted by a term from the ladder that is used to modify the roll.  The results cause mental stress normally and can be staved off with consequences.

If you are taken out by a fear-based attack you will typically be left with a mild phobia related to the subject of the attack. This is treatable with Medicine work and therapy.

Horror is something altogether different. Horror comes into effect when the expected natural rules breakdown and leave you bereft of filters to manage what you’re experiencing. Such a situation can be from witnessing a terrible act of perversity or from being in the same space with unnatural things from the Twain and beyond (note that most spirits are considered natural in this context).

A horror attack affects more than one stress bar. Though it comes in initially as a mental attack, most Horror is mental and physical. Whatever stress gets through your mental defenses is applied equally to your composure track and your health track. Sometimes the attack doesn’t even affect your composure, instead affecting your reputation and health. In such circumstances you think you’re fine, but something is just not quite right with you anymore and others can see it.

Sorrow is dangerous because it whittles away at you slowly, causing you to forget who, and why, you are. You lose drive and passion, and eventually fade into nothing. If a character’s Sorrow is ever greater than their Refresh then they are overcome by Sorrow. When this happens the character will not be able to enter Dream the next time they sleep. More importantly, if they sleep and are unwatched they will disappear, cease to exist, leaving nothing but a black smudge, called a Sorrow-stain, behind.

Sorrow can be removed by being witness to great acts of heroism. Such acts typically involve someone “burning one of their Winters” where they basically channel a memory associated with one of their Winter counts and use that to give you extra strength when the going gets tough. This is like Peter Parker having a winter called the Winter of Failed Responsibility when he lost his Uncle Ben. He can use that Winter from time to time to push himself beyond his normal limits. More can be found on that in the character creation section. The point is that such moments are awes inspiring and lift the hearts of those who witness them allowing them to remove a point or more of Sorrow.

The effects of  Sorrow can be countered by spending a Fate point. It can be removed by engaging in a social attack against yourself to instigate a joyous moment. The removing of a single point of Sorrow is a Great task. For every point beyond the first that you have, the difficulty to remove one point goes up the ladder one step. Certain extenuating circumstances and failures can give you a negative penalty to the roll. Each person that you bring into the ritual that you have a connection to (some shared aspect) gives you a +1 to the roll. Such a ritual can only be tried once per milestone. It takes time to fully cleanse oneself of Sorrow.

Aside from being great forces of evil, the aptly named, powerful beings known as the Sorrows are particularly dangerous to as it relates to the effect of Sorrow. They have an aura of dissonance and wrongness around them that automatically give you a point of sorrow with no chance to resist for most people with common Mettle and Presence. The strength and rate at which this happens varies among the Sorrows and with their victims. When you are primed  to become “sorrow-stain” the Sorrows can interrupt that process and recreate you as something . . . else. What’s more dangerous is that, since they often walk the world in disguise, you may not even know it happened. One morning you just wake up with some Sorrow, and all you can think about is that strange, haunting child you met in the alleyway. Other horrors and breachers have been known to have similar effects.

Characters who become sorrow-stain are, for the most part, gone. They have not entered “The Road” so they do not get reincarnated later as everyone else does. It is said that there are powerful rituals of the Principles and Essences that can sing a person back into existence. But people who can wield such power have not been seen since the time of the Trail of Dream and Shadow. Be carful of tampering with Principles and Essences in the area of Sorrow-stain you might bring back just enough of the person to create a Curse. and that’s an altogether different problem for everyone as the Curse grows hungry and tries to pull all into its moment of despair.