Home Ehdrigohr The Temples of the Still

The Temples of the Still

When the Still was made manifest, and the Woe were put to sleep, great structures were erected to mark the location of the battles and the sleeping woes. There are eight temples in all, one for each of the slumbering Woes. The temples are a variant of the spirit towers but act as conduits for the energy of the ritual and keep the woe beneath asleep. The temples were not built by humans. They were erected by the Songs themselves, like great spears they were thrust into the earth to pin the sleeping woe, and are believed to be nigh indestructible. 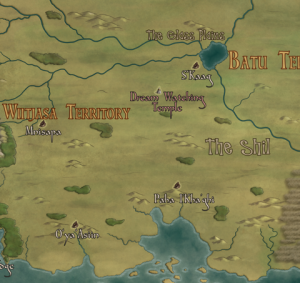 A section of the Shil showing where the Dream Watching Temple can be found.

Each temple has adherents and orders dedicated to guarding it and ensure that it doesn’t get desecrated or misused. The power flowing in and around a temple is great, for not only do they hold the Woe, they also empower the use of certain Mysteries. This makes them a target for the wicked who would seek to find ways to pervert the power and use it for their own gain. There are always such men and women of greed, and it is said that there is something about the Woe that reaches out to such people in their fevered dreams and plants the idea of conquest.

No Shiver may enter the area covered by the emanations of a temple. Doing so has an effect much like that of the Withering as the evil things begin to burn as soon as they enter. This means people always know that they can seek out a temple, if one is near, for sanctuary.

The power of the temples is great, but not eternal. Like the world, and all things created by WhatMoves and the Songs, they too have seasons. When the temple is fully powered it has an area of effect that extends for miles around it and the brilliant beacon atop of it glows like a small white star. As time passes however the temples flare as the Woe attempt to waken or when hordes of Shivers throw themselves at the edges of the barrier.

This flaring causes the temple to seep power which, in turn, causes the color of the light to change. The light goes from white, to yellow, to red, to black which is off. The light doesn’t just switch, there is a period of time in which there is flicker. For a temple to go from bright, to red-flicker, takes no less than 4 years, as many as 8.  When the light of a temple is in red flicker it is time to recharge it with the Rituals of Stillness, for as soon as one starts to go down then the others will follow suit as their energy is redirected to support the fading towers. The people are constantly reminded of this process through the image of the medicine wheel and the colors associated with it that permeate the cultures of the nations.

The temples don’t all fade at once. They lose energy at varying, different, rates so the people never know which one is going to red-flicker first. The attendants keep watch over them. As soon as one shifts to red-flicker they send messengers to warn the world and let the nations know that the time for the Rites of Stillness to begin again is at hand. This is a dangerous proposition, for as the light fades so to do the effects of the temples on the Woe and the shivers it breeds. Creatures of darkness and evil begin to gather to assault the fading temples in hopes of bringing them down before the Rites can be enacted. Only a collection of the most stalwart of heroes can engage this journey. They must travel from temple to temple, fight through the evil and perform the Rites. This is called the Trail of Slumbers.

Once the process has begun, the TrailWalkers, as they’re called, must act swiftly. They don’t know how much time they have. Most elders estimate that it is typically about a year from first red-flicker to the last, though it can vary by about a moon.

The 8 temples, who watches over them, and the Woe that they keep are as follows:

Found deep in the center of the Shill, currently south and west of S’Kaag. It is guarder by the Crows of the Shil. Dream Keeping Temple is connected to Dream and those within it can walk directly into the realm of Dream. It maintains the Still of  G’Naag Ite, Woe of Soul Eating Nightmares.

Found in the far northern wastes of The White, north of The Line. It is guarded by the Frost Brides with support from the BearWalkers and White Liners.

Wisdom Keeping Temple is also connected to Dream and maintains the still of S’Ahmpho, Woe of Hungry Madness.

This temple is found at the eastern edge of the Blood Forest. It is Guarded by the order known as the Tathlum.

Blood Weeping Temple is connected to The Road and empowers Body and Earth. It maintains the Still of D’Yargahdhu, Woe of Hungry Flesh.

Found on the highest mountain at the southernmost Waking Mountains. Known as Shu’s Chair, it is on the western side of the mountains and rises above the Ashen Cloud overlooking the Shiver Plains. It is guarded by the Illuminators and the Illumine Spears.

Thunder Keeping Temple is connected to both the Road and to Shadow. It maintains the Still of An’Nuwn, Woe of Feeding Darkness.

This temple is found on the border between the Blood Fields and the Blood Lands. It is the hardest temple to get to due to the sheer numbers of shivers, curses, and horrors to be found in the area. It is guarded by an order called the Broken Spears who are one of the most battle worn forces in the world.

Thunder Keeping Temple is connected to Shadow. It maintains the Still of Bey’Emot, Woe of Crawling Curses.

This temple is found in the southern Beyduuni Waste. It is surrounded by the ruins of strange giant contraptions erected by the Council of Gears to try to experiment with extracting power from the sleeping Woe. It is guarded by the Keepers of the Sand who have begun a campaign of guerrilla warfare to bring down the Extraction Towers the empire keeps trying to build.

Sand Keeping Temple is connected to Shadow and The River and empowers Earth and Fire. It maintains the Still of Tshai’Atan, Woe of Bleeding Waters.

This temple is found on a sheer cliff face on the southern portion of the Sunder. The area is the most treacherous and ever crumbling sections of this archipelago of cliffs and crags. It is guarded by an order called the Falling Jays of SkyBreak, a troupe of mostly D’Zul Jays, supported by a number of Crows and Doves.

Sky Falling Temple is connected to The River and empowers Moment and Destiny. It maintains the Still of O’Sai, Woe of Screaming Salt.

This temple is found in the Great Mire, close to the Western Coast. The poisonous mire and the monstrous animals that inhabit it, make traveling to this temple a hazard in itself. This is made worse by the fact that the temple tends to move about as its Woe shifts in its sleep. It is guarded by the martial order known as the Poison Foot Scholars who appear to have mastered the poisons of the swamp and which are most effective on Shivers and people.

Pulling Earth Temple is Connected to the River and Dream and empowers Water, Soul, and Life, and Truth. It maintains the Still of B’Nnahyeh, Woe of Foetid Tongues.