So I had this article sitting on my computer that I had originally written to work with someone who was doing some great work helping people to find themselves. That partnership dissolved and I realized this piece never got used so I thought I’d put it out there for people to consider. If this musing speaks to you as a useful introspective tool then please use it. I feel like there is a great therapy game mechanic in here somewhere but haven’t yet extracted the essential ichor to make it.

It came from this article I read on bullying a while back. After reading it I got this experience/understanding of the idea of how we have this system within that helps us to survive the ongoing ordeals of our life. It does so by adjusting us on a low level to create a version of us that can withstand the ordeal.

This transformation doesn’t remove the pain, but it does seem to set new margin markers to detail what is tolerable. This is akin (in my strange mind) to the idea of “White Balancing” with a camera. Depending on the intensity and color of light in a location, what we see as white changes. So to get proper white in an image you need to take a picture of a white board in that light and keep adjusting settings until white things show up correctly as white. (That’s the poor man’s version. It’s a lot more complicated than that. A better break down can be found here.)

It’s wonderful because it allows us to endure by helping us to mitigate our extreme reactions. It’s a trap however because it sets a new base line for us to operate in and we can get comfortable with that baseline.

This makes me think of a couple things. The first is transformational superheroes, the second is how champions that step in for us can become as much of a problem because of the dependencies they create. 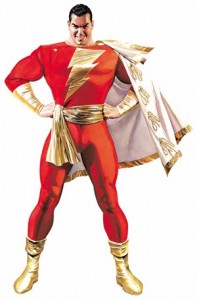 There is a character in DC comics called Captain Marvel (one of my favorite characters) that I feel embodies this idea. Captain Marvel is really a young boy by the name of Billy Batson who is homeless or an orphan in an orphanage depending on the version of the story. He’s on really hard times and regularly the target of bullies. While fleeing from bullies (in the most recent versions) he finds he is chosen by an elder/ghost/wizard to be the person who connects with the Divine to be a champion. All he needs do is invoke the word SHAZAM which represents certain traits:

After saying the word he’s hit by a bolt of lightning which gives him a new body in the form of the fully grown adult magical being known as Captain Marvel. While he has this body he still is preteen Billy inside mentally and emotionally

This has interesting side effects.

Billy is now impervious to harm from what would have harmed him before and now can endure soo much more.

He is able to make profound changes in his world.

People who encounter him don’t quite know how to build relationships with him because, while appearing to be an adult, his worldview is quite juvenile (though some women rather seem to enjoy this aspect).

He’s not quite sure how to relate to people since adult reactions are expected because of his shell but he doesn’t always have the emotional capacity to follow through. (He’s still like 12 or 13 inside).

He’s got no grasp of physical intimacy (it actually frightens him a bit).

He stays being Capt Marvel for longer and longer time periods but this seems to have the side effect of slowing down his real aging and associated personal growth. Basically being able to be Capt. Marvel keeps him a 13 year old boy (or however old he is these days).

It also makes him take on things beyond what Billy should be able to deal with which is trouble when, for some reason, the Capt. Marvel manifestation fades and he is left in a terrible situation as a real 13 year old boy.

Though it has drawback, Capt. Marvel is a role that he can assume to get through hard times. The big problem is once he got access to Capt. Marvel he tended only to be able to see the problems that only Capt. Marvel could handle.

I think we all deal with these struggles. We all have our own crucible. It’s good to become mindful of what effects our struggle, and the crucible they happen in, has on us and what effect we have on them.

Here’s an exercise to get you thinking about it all.

As you have struggled through your own crucible what heroes and villains did you create for yourself to project into that gave you access to tools and experiences that you wouldn’t have otherwise had access to? This is the thing that others may sometimes perceive and felt provoked to say things like “you’re not yourself” or “I don’t know who you are anymore.” It was running the show and you weren’t even aware because you didn’t know how to limit and perceive it.

Think about which of these avatars you found so comfortable that they became synonymous with your being then do the following things.

The important thing here is that you own your own transformations and becomings. No need to look for some esoteric old god, goddess, or spirit that has been prepackaged to box your growth in. Somewhere between the templates and ideals is the real you. That’s the you that needs to be engaged. You are ever changing/flowing spirit and are always co-creating yourself with yourself. You get to design the experience of you, and how you will manifest, in the world in relationship with other things in the world. You don’t exist in a vacuum forces are always at work on you and you are also a force at work on other things. Naming personal avatars might help you to see the relationships and forces in play and allow you to better feel the rhythms and engage in the dance.

The goal of this writing isn’t to dictate or to pronounce any particular truth. It’s to get you thinking about you and your world and how you affect each other. You might decide this is all hogwash and toss it away. In a way that’s kind of ideal to me because then, hopefully, you begin to think about what your own truths are and how to share them. What is your story, your forces, your dance?