The wondrous Wu Towns live atop the mighty “Unciwakan”.

The Wu Towns are strange and wondrous settlements that have been built by the Chi’An upon the backs of the great creatures known as the Unciwakan. The Unciwakan, are magnificent tortoises size of mountainous proportions that maintain a symbiotic relationship with the Chi’An.

These Wu Towns range in size from small towns to medium sized cities. The maximum size depends on the size of the beast, or cluster of beasts, below. 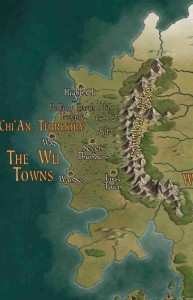 The Great Mire stretches out, in the west, for miles in every direction. The Wu Towns call the treacherous swamp their home.

There are five of these great towns. They are:

Within the Wu Towns, the Chi’An the people are divided into the subcultures of Low and High. The terms Low and High refer to a physicality of station, where those closest to the backs of the Unciwakan, and the swamp itself, are considered low and live in shanty towns assembled directly on the shells of the Unciwakan. From there they tend to the great beasts and live lives of hard labor complicated by disease and sickness brought on by their proximity to the swamp.

Above the Low, in interconnected spires that rise up into the sky, live the High. Theirs is a life of comfort and convenience that exists because of the work done by the Low.

The High are families of merchants who also manipulate the governing council who are revered elders known as the Seers of the Seven Thunders. These families have brought much science and convenience to the people by finding ways to harness not only the Unciwakan, but also by finding ways to harness the gases of the swamp and the air currents, giving them access to balloons and other devices that will fly them to places to trade.

Unfortunately very little of the luxurious life trickles down to the Low which has caused quite a bit of strife of late, as rebel groups have formed who insist that life must be made more even. Also, like the Council of Viziers in Salduun, the High have been pushing to regulate those who wield the Mysteries (notably the Elements).

Unsanctioned low born use of the Elements can cause result in being arrested. Gangs, that have formed among the low often recruit those who wield any mystery other than the Elements to avoid discovery. Particularly, among the gangs of Wu, those who can wield the Essences are highly prized. While the High Merchants fight over machination and control of the elements to get goods delivered all over the lands, the Wu gangs (known as the Step Clans) focus on bending space and gaining access to the traveling lands to ensure their ability to move unseen. As a result, Essence use is considered highly suspect in visitors and outright illegal (tantamount to terrorism) within the limits of a town.

This doesn’t do much for the common people however and the growing dangers of living among the Low give rise to more and more unrest every day. Some councilors among the high agree that the situation needs to change and push for more rights for the Low, while others insist that the Low must be kept in their place, by force if necessary.