So Ehdrigohr is almost here. I’m waiting for proofs from the printers and if all goes well I can pull the trigger and place the order. It’s been a long road. It’s not over yet though. I have a handful of adventures to get done as well. One in particular I’ll be running at GenCon this year. WOOT!

This adventure is called “Red Dog, Hungry Dreams” and will serve as an introduction to Ehdrigohr hopefully hitting all of the major beats of what I think makes a good Ehdrigohr adventure, setting the stage for the others to come. So rather than talking about it I’ll leave the introductory narrative (a tradition I intend to maintain for adventures and sourcebooks). Hopefully it sets a mood, paints a picture, and develops a little appetite for what is to come.

It happened in the Year of Painted Skies. . .

It happened in the Year of Painted Skies, in the hot month of ThickMelons. The rain had not come for some time. The grasses were tall, but brown, and the air was full of dust. Flash fires happened often and scouts and waywardens traveled far to retrieve waters-callers who could bring water to the wells.

The heat took many elders that year, and the shiltonka wandered further north into the foothills of the white rim to find water and a good grazing. Crops were bad and many were hungry. No one slept well, mostly because of the heat, and partly because something terrible was growing and it disturbed our dreams.

The year had begun well.

Thirteen babies were born in town on the first day of the year. The doulas say they that heard thirteen babies, no more, no less, was a sign that abundance would come with each cycle of the moon. My grandmother said such talk was foolish. She says the matchmakers make up those kinds of things and spread them around in hopes of drumming up business with starry eyed fools looking for love. Grandmother was a little dour but had a good heart. More importantly, she knew what she was talking about. She was touched by the Principles. She had no real skill in Love, but she could see destiny as sure as you could see your breath in the winter. People came from miles around to hear her predictions, get their souls read, and to be bound in oath and honor for this and that.

When I asked her if the babies really were a good omen, she say “Cricket. . .”

“Thirteen babies in the Moon of WakingGreen, little Cricket, means that there will be many extreme changes over the course of the year. They could bring abundance. More likely they will keep you uncomfortable and you shouldn’t try to hold on to anything too tightly. We won’t know what it brings until the next moon.”

Four of the babies got really sick. There was something wrong with their stomachs and they couldn’t keep anything down. They wouldn’t eat or drink from their mothers. By the next full moon all four babies had died.

P’ura-fe, one of the mothers – a Batu woman who had settled here at Paha I’Kah’ghi, faded to sorrowstain. All that was left of her was that terrible dark ashy smear on the ground in the shape of her curled up like a baby. Seeing it left a whole deep in my heart. It made me feel empty and alone like that could happen to me any minute. Grandmother says that feeling is the Sorrow. It’s powerful, takes hold, and whittles away at you until you sneak away and fade.  They moved all of the others to the longhouse so that we could all witness them through their suffering and make sure no one else faded.

We kept the bodies of the babies in a circle around the central spirit tower and many people came to help make shoes for them, sang songs and danced for the families.. The next morning we built a pyre, dressed the dead babies in their new shoes, and wished them a good journey on their travels down the road. It was hard to watch as they slowly faded to ash and blew away in the wind and smoke.

While I was watching, the smoke seemed to change color and took the form of a great bloody dog thing with many mouths. It was feeding on itself but getting big and engorged in the process. Then, something blacker than night descended from all sides like dye poured into water. It came at the dog first engulfed it and then began to consume everyone. 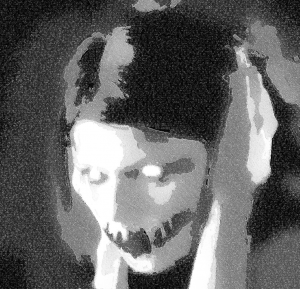 I screamed and couldn’t stop crying. Grandmother pulled me to her and told me to quiet down. No one could see but she and I. It was a vision, the Principles had decided to Weave me that morning.

“What does it mean?” I sobbed through my hands. The image was seared into my mind like lightning in the night.

“A red dog.” She said. “A red dog will come, in the heat. It will be ravenous, mad, and will devour with abandon. But something else comes for the red dog. It must not get the red dog. If it does everything dies.”

“We wait. Never chase a vision. You can only respond when it comes to pass. We must wait and be ready to act.”

“How will we know when it is coming?”

“Just like this vision, the message of this starting will be delivered by children.”

That left me sad for many days. As the spring came on I had almost forgotten about it. Then the heat came and the drought hit. We hadn’t had any traders come for much of the spring and into the summer. They said that there were lots of bandits about and that shiver numbers were strangely on the rise.

A great mass of shivers were seen to the north and most of the waywardens , scouts, and warriors went to hunt them down. The night they left, my grandmother woke up crying.

I helped her from her pallet to her feet. She told me to get material and thread. When I asked her why she said “For the children. They will be here by morning.”

She was right, of course.  As the sun rose, the scouts spotted the, two children running. They brought them to my grandmother for healing. They were overcome with fever, their feet were bloody, and what they said made my stomach suddenly feel like a bottomless pit of despair.

They said “Unsimala! Please help us! The Red Dogs have come to TallBanks and everyone is dying.”