This is a series of articles from gear related items. It’s coming partly from stuff that I took out of the book because it was proving troublesome bringing it over to Fate Core from the original version of the rules which were being written from older, more crunchy versions of the Fate system. It’s also partly meant to be the space to dig down on things like spirit towers and items of mystery.

The first few passes will be focusing in on weapons.

I realize a lot of people really enjoy the more tactical feeling and flavor individual weapons and such give a game. This was intended for the core book but the book was getting too big already and these rules were still a bit clunky. So I thought I’d revise it a bit and put an experimental version of it out for people to play with. I’ll do one category of weapons at a time. It’s important to stress that this is all experimental and the standard was of playing with important weapons as aspects or stunts remains valid. At some point I’ll collect all of these article in an illustrated and more detailed book.

In most cases gear is something that effectively provides a temporary aspect that the player can invoke for free. It doesn’t get any stat or such things as what it can do will typically be dictated by the player in narrative when it gets used. Some effects are more or less convenient or powerful. This is reflected in their Cost. It’s one thing for a player to declare they have rope to use for climbing, it’s completely another thing for them to announce they have boots blessed by the winds that let him leap to the top of the wall.

Generally a piece of gear has one free use. This use can be passed from one character to another. Much like I can hand you a length of rope. Once the free use is gone, assuming the item isn’t perishable, the player can invoke it again if needed by creating an advantage or by paying a FATE point.

Generally weapons are gear that can be used in combat and have a bit more detail attributed to them. The weapons are normally grouped by category for the weapons skills (swords, spears, knives, axes, staff, whip-like, flails, thrown, bows, slings, crossbows, and contraptions). I’m going to be grouping them together in broader categories for the purposes of getting through these articles. The categories I’ll be using initially are blades, spears, clubs, axes, flexible, and ranged. While there may be some crossover most weapons have a primary purpose and belong to a category.  Knives, for example, are blades even though they may be used at range.

All weapons have the following attributes: 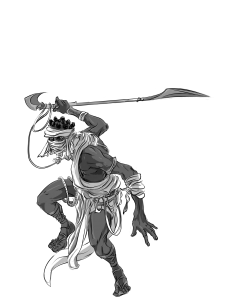 Spears are the defacto weapon of most warriors of the wild. Because of all the hazards that exist as you grow further away from civilization weapons with greater utility become more sought after.

Craftsmen and warriors take great pride in their spears, often carving and painting ornate histories into the shaft and blades of a spear. The Crow’s lance is often seen as the epitome of this practice where the lance itself is an incredible multi-tool that is built by the crow’s flock and family for him with painstaking detail and artistry.

Spears, especially ornate spears, engender respect from the people. Someone who carries an ornate spear, or the spear of a recognized order, will be looked upon favorable by most people. This does however come along with the problem that people take note of you, come to you seeking help, or expect better behavior from you than others.

Spears beyond the standard spear are detailed further.

Crow’s Lance: A dangerous two headed spear that allows those trained in it’s use to bring an almost relentless barrage of attacks to a target. The blades are extra sharp and do greater damage from the momentum of the properly twirled weapon.

Owl’s Spade: A long handled polearm with a heavy shovel like blade at the business end.  These weapons are specially made by each Owl to serve as a focus in their use of the mysteries.  An Owl can create an advantage called talisman by using the spade in a that allows him to focus energies through it.

Spider Spear: This short harpoon-like spear has a hooked point and a chain or special braided attached to it that allows the wielder to slow or catch prey that it’s thrown at. After succeeding with style on a thrown attack the  wielder can create an advantage called “caught” that they can use to try to move an opponent 1 zone toward them or create a fair barrier to stop them from moving for one exchange.

Footlance: A long heavy spear. The spear is specially made to withstand a charge. A user can create the advantage “Set” which can be invoked to do 2 extra stress to a target that is hit by it.

Mounted lance: A heavy spear meant to be used from the back of a mount. When mounted, the user can create the advantage “Charge” that can be invoked on a hit to do +2 stress.

Reed Lance: This long spear is made from specially treated bamboos and other reed grasses. It is a surprisingly flexible weapon that bends and sways with every motion.  Users can take advantage of the hyper-flexible nature of the spear and create and advantage called “snap” where they are able to twirl the spear in such a way that is snaps back for a super swift, hard to avoid attack.

The next time we’ll take a look at Blades and Axes.