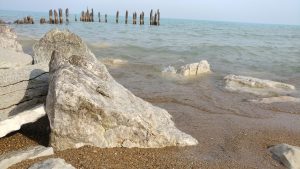 Today was a day of water in Chicago!

Summer warmth that we had enjoyed for a few days had passed suddenly.

When I stepped out of the house this morning I could see my breath plume and swirl and quickly dissipate. I could feel the water in the air settle on my skin giving me chills and ushering me back inside where I watched the street from the warm side of my window.

After a while, small streaks of water began to appear on the window glass. It was raining. A sort of misty rain. There were myriad small insects in the air. They had grown in the warm water pools left from the warm day’s rains, earlier in the week.

They might have been gnats or mosquitoes but they we moving slowly, their motion arrested by the cold air and their wings heavy with moisture.

They didn’t get to live long as swarms of swifts engaged them, diving in and swooping about like children rushing for candy falling from a pinata. They were thankful for the feast that had been awakened and then slowed by the waters.

The swifts and sparrows were unimpeded by the water in the air. A robin tugged at worm in the street-side earth in front of my house. It pulled and stretched the resistant worm until it seemed to snap out of the ground like rubber and into the bird’s beak. It was an interesting stretch to see. I stood up on my tiptoes and elongated my back trying to be like the worm. My motion, however was upward and loose while the worm worked to move downward and become tightly buried. The water had chased the worm out of the earth and had filled the robin’s belly.

When the robin flew off my attention returned to the swifts flitting about, swarming like bats, swooping and soaring. I collected the image of them into myself and retreated into my basement where I put on the music and listened. I let my movements be like the hungry birds diving for those lethargic but agile morsels.

I spun and I swirled until I broke a sweat, created my own water. I was warm now and content.

It came time for me to get to school and I went out, back into the cold wetness. I was never more aware of the extremes of my body as I was when it was wet and cold. I knew every uncomfortable inch.

When I got to my office. I descended into my warm chair and offered gratitude for this safe dry space. I watched the rainfall for a short time. It sounded like soft applause on the downtown streets.

Then I began my work and released flows of creation into words, and phrases, and pixels.

I was thirsty to flow something out so that something else could be nourished.